»  More ways to turn off Telemetry on win 10

Just some stuff their working on for ranger rebalance.

Hunter Ranger: Binding Arrow: The secondary shot from this power should work properly again, instead of not firing if you are too far from the primary target.

Hunter Ranger: Binding Arrow: Will properly applied Thorned Roots again, instead of only applying Strong Grasping Roots when you have the Thorned Roots Feat.

Hunter Ranger: Commanding Shot: Reverted the changes to the debuff effect and duration, and fixed bugs with its application, leading to the following patch note:

Hunter Ranger: Commanding Shot: The debuff should no longer fail to work in certain situations.

Hunter Ranger: Feat: Predator: Now increases damage against your Prey by 50%, up from 40%.

Hunter Ranger: Forest Meditation: Can once again be cancelled via the Shift power.

Hunter Ranger: Hawk Shot: This power should now work better when targeting on angled ground. Note that, when trying to hit multiple targets on angled ground, aiming for the target that is further from you will help the power draw a better line.

Hunter Ranger: Oak Skin: The tooltip now properly reports the total amount this power heals you for over the duration of the buff.

Again, these changes are not on preview yet but should hopefully be there with our next build pushed to preview.

As for some other topics:

Aspect of the Pack, Rank 4 – Looks like a patch note got missed, this was fixed. Updating the patch notes.

Hunter Ranger: Aspect of the Pack: Rank 4 now properly increases the range of the power, instead of decreasing it.

Nature’s Enhancement – What makes you think it isn’t working? When I have it and switch into melee stance, I see the buff Icon appear, my Deflect Severity increases in my character sheet, and our internal debugging shows that my deflect severity has increased. That isn’t to say this isn’t a weak Feat, but it does appear to be functioning.

Plant Growth/Blade Storm: Technically, Blade Storm procs when you deal melee damage, and Plant Growth is not considered melee damage. You don’t hit anything with your swords, you are casting a spell. However, this is a very unclear distinction, I’ll see what I can do.

Also, real quick on animation speeds. Unfortunately, this is a difficult issue. Our animations are hand timed, so reducing them requires rebuilding the animation. This takes a lot more time than just simply tweaking a number. We are discussing changes here, but they certainly won’t be in for this review.

Again, thanks for all the awesome feedback everyone. I really appreciate when we can keep it constructive.

As some of you may have noticed, our class balance isn’t exactly where we’d like it to be. Not too long ago, we touched on this while making some fairly large changes to a handful of powers that we felt were trivializing the game. This time, instead of targeting a small number of individual powers, we have decided to start tackling specific classes as a whole. We plan on continuing this process with the rest of the classes, but didn’t think it was feasible (or wise) to try to handle all of them in one expansion. As such, we had a fair amount of debate internally over which classes we should start with.

After analyzing lots of data about class popularity, class desirability, power imbalances, and class diversity (how much variety exists within a given class – for example, do they all use the exact same 3 Encounter powers and Feat build?), we decided to go with the Hunter Ranger, Scourge Warlock, and Guardian Fighter for our first round of class reviews. In this blog, we’ll go over the changes we made to the Hunter Ranger in the upcoming expansion.

With the Hunter Ranger, it was apparent from combat log data that they lag behind the other DPS classes a fair amount in Dungeons and other end-game content. While a certain build (The Trapper Thorned Roots build) allows them to get close to competitive with other classes, any deviation from that very specific (and a wee bit broken) build would greatly reduce their effectiveness. This was problematic because, for a lot of players, the Trapper theme and playstyle is not what attracted them to a Hunter Ranger. They wanted to be an archer, or swing 2 swords, or possibly both while being a Drow for some reason. Unfortunately, the Archery and Combat builds were the decision traps for the player – come, shoot your bow, it’ll be fun they said! Then you see how far behind you are, and you either give up, or find the Thorned Roots build.

When we did analysis of player power choice, we got to see some very clear examples of this. While it was true all across the board, the issue was especially true for our top-geared Hunter Rangers: 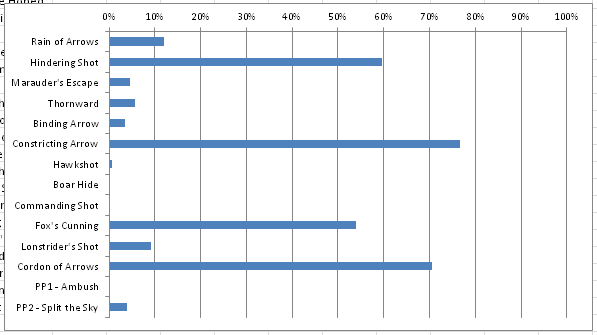 This is a breakdown of power usage by high-end Hunter Rangers. One thing we noticed right away - the 4 most used powers are the powers used by the Thorned Roots build, and they’re used way more than any other powers. Second, there are multiple powers with 0% usage – and plenty others that are close enough. So what do you do?

In many cases, when you have 1 stand-out power that leads to only 1 build being viable, the answer is to nerf that power/build. However, that was not the case here. When we looked at the Thorned Roots build relative to other classes, it was still not quite good enough. This meant the other builds were in need of some serious help. We did a review of the entire suite of Hunter Ranger powers, and compared them with similar abilities from other classes, and found that most were lacking. Almost every single Hunter Ranger power is getting some changes in the upcoming expansion. One of the most common changes you’ll see – almost across the board, the “base damage” of all ranged powers was doing less than it should. “Base damage” in this case is the damage a power does without including your weapon damage. You’ll see a lot of patch notes like this:

Another issue that Hunter Rangers have is much longer base recharge times on their powers relative to other classes. This is due to them effectively having access to 6 Encounter powers, instead of 3. However, if you use an Archery build, the melee-side power of your Encounters is frequently far less useful than you will find both powers to be if you go the Trapper route, or even the Combat route. In addition, the Thorned Roots build gets around the long cooldown issue with Feats that let you reduce the cooldown of your powers by applying Roots and stance-dancing, but the other builds didn’t have great ways to deal with these long cooldowns. In addition to reducing the recharge time of several of the Hunter Rangers powers, we made the following changes to ease this concern for Archery players:

Feat: Unflinching Aim: In addition to its current functionality of increasing your Ranged Damage, this Feat now causes your hits from Aimed Shot to reduce the recharge time of your currently recharging Ranged Powers.

Aimed Shot: Charge time reduced by 0.25s. Damage is still the same, and AP generation is still roughly the same, resulting in an increase in DPS and APS.

Aimed Shot: Charging this power is no longer interrupted by taking damage.

This means that Archery players will find that Aimed Shot will be their go-to At-Will power, instead of… a very frustrating At-Will power.

There are a ton of other changes – around 100 patch notes for the Hunter Ranger changes alone – but I can’t get to them all here. The end goal was to get to a place where all 3 Feat builds – as well as both Paragon Paths – felt useful. I’m not sure if we’re done yet, but our internal testing so far has been much, much better than where we were. I’ll rapid fire a handful of other powers changes here:

Ambush: The Ambush effect is no longer cancelled by movement, and targets damaged by your Ambush now take additional damage from your Encounter powers for 5 seconds.

Binding Arrow: Damage dealt to secondary targets now receives full damage bonuses from the caster. This includes critical hit damage, however, the secondary hit will not be considered a separate critical hit.

Commanding Shot: Reworked the debuff this power applies, and reduced its duration. Reduced the damage debuff component to 10%, down from 15%. Changed the defense component from lowering their defenses by 15% to increasing the damage they take by 10%. This changes where in the formula the damage increase takes place, and this power can cause the target to take increased damage even if you have enough Armor Penetration to completely ignore their Damage Resistance.

Forest Ghost: Can now strike the same target once per second, instead of only once per activation.

Marauder's Escape: Now fires off 3 quick shots straight ahead as you are jumping back.

Shift: Increased the distance of each shift ~30%.

As mentioned, this is just a small chunk of the total changes, so be sure to check out the test servers for more info. Also, just to be clear – it’s not all rainbows and buffs. Some powers did get some adjustments down alongside other changes.
For example, Maruader’s Rush had its range reduced by 20 feet, while its activation time and recharge time were reduced. Overall though, we expect Hunter Rangers are going to be very happy with these changes.